Currently at PS1 Contemporary Art Center (A Museum of Modern Art Affiliate in Long Island City New York http://www.ps1.org ) one can find Argentine artist Leandro Erlich's "Swimming Pool" (this, after ten years of trying to bring the piece to NY; it was first conceived in Texas in 1999, where Erlich was an art student).  The two-story installation has visitors first come to the pool from above - step ladder at the side, ripples on the surface, haunting figures of others visitors floating (?) below - then, by wooden stairs off to the side, one crosses - clothed and dry - through the pool wall and into the deep.  The illusion for the upstairs crowd is enhanced when downstairs patrons splash their arms about and do the crawl "underwater".
While perhaps "simple" (compared to other concept/content heavy works at PS1 right now), the piece is direct, effective, and playful - and in the chilly New York  (where, unlike sunny Southern California, swimming pools are rare) winter, the sight harkens to a long-lost and much-regretted summer.  Erlich is from a family of architects, and one sees architectural issues of status and living space playing out with lingering emotional splashes (Marco Polo, bee stings, bleachy eyes, adolescent groping). 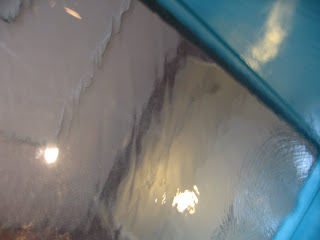 This being said, the piece is also a disturbing lie: it has a surreal pop ("a swimming pool! here?") at first glance, but so tames the nature of pools that, in the end, I wasn't sure if this lie was or wasn't also part of Erlich's intentions.  What is so off-putting?
First, while the surface of the water is cleverly counterfeited, it remains untraversable.  No shoves, toe dips, lost quarters, or cannon balls will break the water.  The pool is thus reduced to surface - to Looking Glass mirror-ness without a "through" - and hi-jinks, horseplay, trepidation (is it too cold?) and occasional annoyances ("stop splashing!") are liquidated.  Whether you use a ladder or steps to descend slowly into a pool, or take the plunge, whether you try to mitigate the sudden shock of cold or embrace it, a real swimming pool is perhaps the only time that humans feel their body gliding through a plane from one world to another.  But not here.
Once under the waves, a real estival swimmer faces other challenges, other risks: his or her weight, the problem of holding breath, trying to focus or grope about, the chill, the air caught in the puffing shorts... Erlich's simulacrum however  makes swimming unswimming: another walk about the room.  The play of light above and the shimmering ghosts of those looking down remind us of "being below", but no more than pre-made postcards of Paris capture the subtle touch of a lover's hands in the pre-dawn fog while crossing the Pont des Arts. 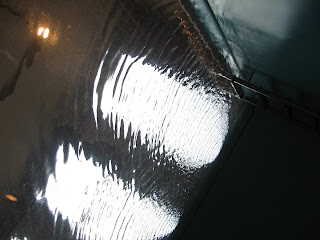 Which is to say that by these loses, by the deficiencies of Erlich's work, other pools and pooling moments may come (if we seek them) flooding upon us.  These things that this work fails to bring.  Preteen awkwardness while changing at the Y.  Aching fatigue after laps.  Amorous glances in the pool or during showers.  Tarps puled over above-ground pools, caked in rotting leaves and deep green algae.  Childhood peeing.  Vacation packages in cheap hotels, towels lain on lounge-chairs strung with vinyl.  Hot tubs and sexual adventures.  Slips at the edge and stern warnings about running or shoving.  Inflatable splashers.  Slides, boards, lanes, debris catchers.  Swimming holes in old quarries.  The feel of the hot bricks and the beaming sun as you pull yourself out shivering.  One wonders if even such common loci as kitchens, bathrooms and bedrooms can hit such a complex nexus of memories and emotions, both of space and status, but also the body -- the fundamental nature of breathing and muscle, the womb, the skin, sex -- of family, of risk, of play and of aging.
Which is to say that I would rather there had been a real pool here, and that someone had pushed me in.
p.s. I expect that much has been written by phenomenologists about the differences between beaches, swimming pools (of which there is an amazing diversity), reflecting pools (both the clean coin-peppered versions seen in our capitals and the algae-incrusted still dark tains found in jungle temples), boating pools, Renaissance and Baroque fountains with tritons rising or sculpted grottos lost in the byways of overgrown parks, gay baths... these and others each draw us, haunt us, scare us by turns, in ways that our language seems hopeless to fully illustrate.
p.p.s. I wonder sometimes if the iconography of the swimming pool and of the bather in gay-related art, fiction and movies -- David Hockney, "Gods and Monsters", "Milk", "Death in Venice", "Dancer from the Dance", Herbert List, Bruce Weber, porn, and so forth -- doesn't also perform (frequently) a kind of simplification/reduction of the pool as "locus amoenus" ("pleasant, lovely place"), a rhetorical term used to describe the groves and shadowy valleys from which poets speak of nature, love and simple pleasures...  The individuals splashing about in most of these works are rarely screaming tots or sluggish over-tanned and slightly over-weight old lions, but rather stunning youths and young men at the epitome of their classical beauty.  Which is fine as a short-cut for talking about desire, but hopelessly insufficient for plumbing the soul.  "The Swimming Pool Library" is perhaps an exception.

Posted by EastVillKit at 9:54 AM No comments:

Other Artists and Blogs